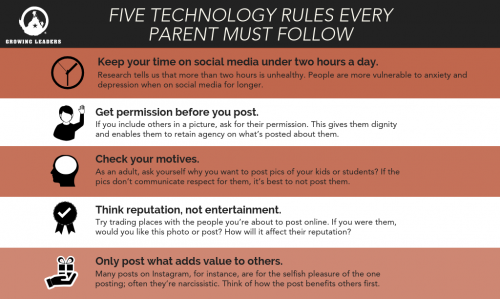 In a recent article in Fast Company magazine Sonia said when she was younger, she could hardly wait to participate in social media. Upon reflection, she later wrote: "Several months ago, when I turned 13, my mom gave me the green light and I joined Twitter and Facebook. The first place I went, of course, was my mom's profiles. That's when I realized that while this might have been the first time I was allowed on social media, it was far from the first time my photos and stories had appeared online. When I saw the pictures that she had been posting on Facebook for years, I felt utterly embarrassed, and deeply betrayed."

What her mother and sister thought was "cute" and "innocent" felt much different to the person actually in the photo, Sonia.

If parents and educators desire students to handle social media well, and be careful about what they post, we should think twice about posting their photos online as well.

Sonia wrote that it would have been different if her mom had merely shared some of those personal pictures to family members or close friends. Instead, her mom and sister felt the need to broadcast them publicly online. Sonia wrote, "Teens get a lot of warnings that we aren't mature enough to understand that everything we post online is permanent, but parents should also reflect about their use of social media and how it could potentially impact their children's lives as we become young adults."

"The fact is, our portable devices have both connected us and divided us, Tim Elmore wrote in a recent article. "Some, I'm concerned, are more consumed with posting their life, than living their life."
Workshop: Leading in Difficult Circumstances
Fighting the Purity Battle Before & Within Marriage